5 Secrets to Raising a Teen Who Isn’t an Entitled, Spoiled Brat 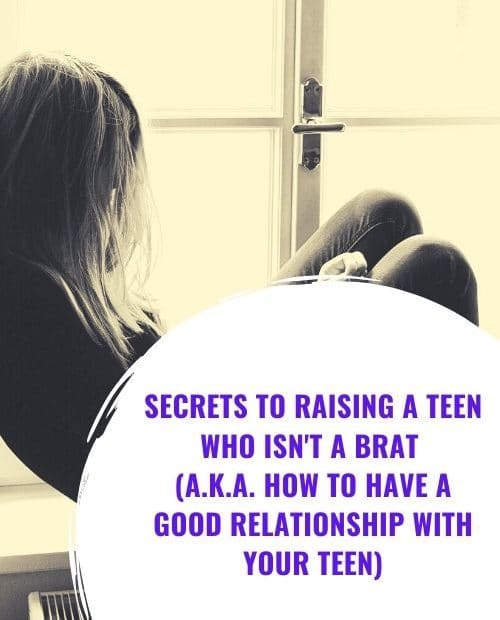 What are the secrets to raising a teen who isn’t an entitled, spoiled brat?

Secrets to Raising a Teen Who Isn’t an Entitled, Spoiled Brat

Raising a teen isn’t easy. But then again parenthood hasn’t always been a walk in the park, right? Somehow pregnancy and labor woes turned into temper tantrums, which later somehow transformed into phone/device/time management arguments, and disagreements over friends or relationships, money/allowance, complete with stair stomping, slammed doors, and broken rules.

But I’m going to be completely honest here and you may not like it at all. If you and your teen are in a constant state of struggle, the blame falls largely on you–the adult. (I’m envisioning teens retweeting that sentence now, as ‘I told you so, Mom/Dad.’). And if your teen behaves like an entitled brat, a big chunk of the blame also falls on you.

In case you’re wondering, no, I didn’t grow up in a perfect, flaw-free family household. My childhood was at times messy and it wasn’t always easy. Like most families, there were dysfunctional elements and unhealed adult wounds or needs that spilled out into my childhood.

Though I remember telling my mother, probably during a heated teenage argument, that I’d never have children, I eventually had four. I promised myself that I would be the best version of myself for myself and for my children. I would do my best to give my children a childhood that would instill strength, resilience, self-confidence, and self-reliance, and most importantly, encourage them to be uniquely themselves, hopefully with minimal baggage that would later require ‘fixing’ in adulthood. I would raise happy, well-balanced, appreciative, self-confident, loving, and kind humans.

For those of you who follow Wanderschool, you already know that my kids are homeschooled — unschooled. Just like I said I would never have kids, I also said I would never homeschool my kids. And then, like magic, my kids were homeschoolers (it was challenging at first, but now it’s AWESOME and I would never not homeschool my kids, unless of course, there was absolutely no other option. So, I think homeschooling has a lot to do with why my kids are awesome, kind, outgoing, and grateful, NOT brats. I also think raising my children in a travel, somewhat nomadic, lifestyle has much to do with it.

However, to raise a teen who is NOT a brat, I don’t think homeschooling or travel are prerequisites in any way. Homeschooling and travel are only bonuses toward the goal–after all, travel makes you appreciative and humble. As one travel writer points out, citing French novelist, Gustave Flaubert, “travel makes one modest. You see what a tiny place you occupy in the world.” Travel makes it hard to be a brat when you see your small place in the world, and how much struggle and hardship exists. Somehow travel gives perspective to relationships and time (and how delicate and temporary those two can be), especially to seemingly important-in-the-moment arguments like screen time.

Affiliate Links Disclosure: My posts sometimes contain affiliate links, which mean that if you click on them and make a purchase, I may earn a commission, at no added cost to you. Thank you so very much for reading my blog!

2. Commit to Acknowledging and Fixing Your Own Unhealed Wounds. Yep, this is about you. Stop denying or suppressing your past hurt or wounds. Often people are too filled with shame to pause and look inside themselves–sometimes there’s fear that doing so will destroy the image they have created of being ‘all put together.’

Be honest with your teen about your struggles. Don’t try to hide them. Don’t be afraid to communicate who you are, your needs, your failings, and your strengths. More on this in #4.

3. Let Go of Things That Don’t work for you or your family. You know what’s working and not working for your family. If your job makes you miserable, and you come home grumpy or with a bad attitude each night, it’s going to be hard to be the person you want to be for your teen.

You probably already know well that your job isn’t working for you, at least emotionally, so it’s probably time to look into what factors are contributing to that stress–maybe it’s time to start looking for a new job opportunity. The same goes for anything else that isn’t working for your family.

Let go and make changes. As you shed the things that aren’t working or swap them for things that do work, you’re going to be a lot happier, your teen will be happier, and so will life with your teen. Talk to your teen about what he/she thinks isn’t working. See #4.

4. Reshift, Rethink, and Redefine the Way You See Your Teen and Your Relationship. This is perhaps the NUMBER 1 most important secret to BRAT-PROOFING your teen. This is also almost an instant fix to bratty behavior. Start putting yourself in your teen’s shoes. Imagine yourself as your teen (empathy). Would you want to be treated the way you are treating him/her? What do you need from your parent in that moment?

Guess what? If the battle looks like it’s superficial or trivial on the outside, there’s a root to why it’s such a big deal to your teen (and to you).

Don’t sugar coat important things or insult your teen’s years of experience as a human on this planet by belittling them or his/her ability to think and evaluate a situation or feelings.

Imagine you are talking to your best friend. (I thoroughly believe a parent and teen can be best friends and honest and open about everything with each other–I think society has wrongly conditioned us to believe that we can’t be friends with our children because they won’t respect us…I believe this is untrue).

Instead, you would surely respect your friend’s perspective, even if you disagreed–you would probably thank your friend for explaining his/her view and then explain your views. If your friend said something rude to you, snapped at you, or acted annoyed at you, you’d probably take it in stride or look for explanations for the behavior (such as a bad day at work) and not take it personally.

If you did something wrong, you’d likely apologize willingly to your best friend. Apply the best friend approach again. Taking this approach with your teen, and valuing his/her thoughts, understanding why he/she wants to do (or not do) things, and having a grasp on the basis of his/her thoughts and behavior is a powerful secret to raising an awesome, respectful, appreciative, and non-bratty human.

Plus, the bonus of this approach is that you will come to have a really special relationship with your teen sooner than later.

5. Be consistent and Do number 4 over and over again. Every time. Every day. In Every Interaction with Your Teen with consistency. It’s not too late in a relationship to have the relationship you want or to help guide your teen toward a better version of themselves. Yes, it’s certainly easier to start when a child is younger, but there’s no time like the present.